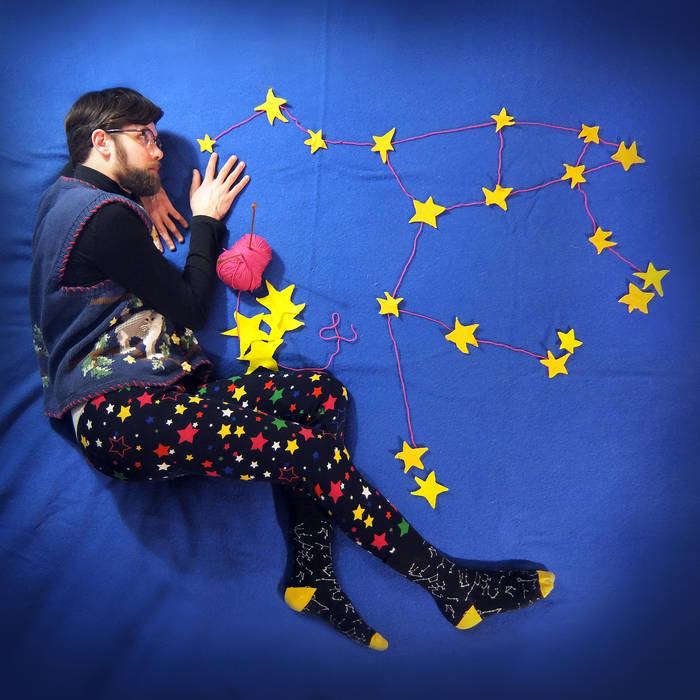 Joey Albanese "grief poem" is one of those songs that hits you and you say to yourself, damn I need a drink. so you get a drink and then you say, let's listen to that again, because it's really really good. beautiful work here Favorite track: grief poem (everything's collapsing).

Wes Muilenburg one of the most emotional and best albums of 2018 so far, absolutely fantastic Favorite track: liturgy part three.

earth to ursa major was written/recorded/mixed by jordaan mason in their apartment and in the stairwell of their building using an app on an old cell phone and some free software on a computer between february 2017-february 2018. this includes ruhee, valley, and ev's parts, but otherwise all of the other players recorded themselves and sent their tracks to be mixed in. jordaan wrote all the arrangements except for the parts performed by ev and sylvia, which they wrote themselves. the album was mastered by matt ross.

the song "grief poem (everything's collapsing)" was partly inspired by the writings of vito russo, whose archives i visited at the new york public library a number of times between 2013-2014. the phrase "humiliating sobriety" in the song "fire/housework" comes from walter benjamin. "made and remade continually" makes several references to virginia woolf's novel "the waves," including the title of the song, which is a direct quote from the book. the line "i'd like to propose a watermelon" in the title track comes from my husband jason aviss. "awl/leather" makes reference to leonard cohen's song "anthem."

the cover photograph was taken and edited by tara fillion. jordaan designed and built the ursa major constellation out of felt and yarn on a blanket given to them by dee addario. the cat vest was a gift from sylvia haynes. the constellation socks were lent by jason aviss. the star leggings were an honest ed's find (what will i do without you?).

all my love and thanks—
to jason, my family, cong, sylvia, kristina, val, sarah-tai, tara, james, steve, michael, brock, andrew, jonathan, max, never, dan, sharon, tim, mike, bret, tristan, lowell, mitch, and all my pals in the box office—for encouragement, listening, talks, walks, smokes, jokes, instrument lends, and all the rest, you're the best
to the featured players who contributed their time and energy to this recording project and brought the sounds in my head to life, and to matt for his amazing ear and heart in the mastering process
to the piano goddesses who bestowed upon me a free piano just because i filled out a survey, with which i wrote and recorded the majority of this record, it came into my life at a time when i really needed it (can't you tell?)
and to you, for listening

note to listeners: if you would like a digital download but can't afford it, just get in touch at the contact link below & i will get you a download code, no questions asked. if you like the music i want you to have it, so please get in touch.

Track Name: grief poem (everything's collapsing)
on the news, a man said i did not exist! he said he would not acknowledge my body, my blood! he said he would not acknowledge the ways his words unraveled me! i shouted at the television (even if the words went to nobody). i said, “there's nothing wrong with my body, sir!”  but he didn't hear me—he was too busy setting the world on fire.

on the news a man said, “she asked for it.”  he then gave a definition of what he called “consent”— he said, “she was wearing clothes that clearly showed  what he sought, and so he got her drunk and took her home. haven't you learned yet that this is what friends do?  and boys will be boys, men will be men, this world is not for you!”

on the news a man said, “another one gunned down!  but hey, we're here to help you, as long as you stay on the ground.” they only saw his skin, so soon the bullets hit, and now a widow makes the beds at night for her frightened children who have to watch officials say they saved us from a villain, and that a uniform once it’s worn protects from retribution!

so here i am again  crying at what i don't even believe in.  here i am again  not knowing if or when  i'll see my far away friends.  god i want to bear-hug so many people that i can't!

in the meantime, we're filling buckets with water. i guess we'll put out the fire  when we're done getting warm on the embers!

the noise in my head feels louder or perhaps i've just become quieter. all i know is it's all i can hear:  a voice that says i should disappear! see: they want to erase us! or at least put us in cages! and then call it a nation! well, i'm losing my patience!

oh, please don't go to the movies!  or, if you must, then let's sneak in for free  and we'll leave before the ending.

you know—so we don't have to watch ourselves die!
Track Name: another war
we returned home, you with a raincoat, me a permanent cough. put less and less clothes on, could not decide whether or not we wanted to walk to the ends of the earth, or  if perhaps we’d rather rest in our own backyard dirt.

our neighbour gave us cherries after every full moon.  i sat and sucked the pits as you sharpened your harpoon. you sang a sudden soliloquy of sorrow:  “must i arm myself with this weapon again tomorrow?”

the weather station blared that another war would be coming:  some scattered clouds, a little sun, and then it would be storming. i tried to plan our escape while you went off to fight— gathered what i could: some tenderness, some twine.

i set to task, quilting a patchwork of memories:  a swath of cloth, a fold untold, a riot of reverie.  it came in bursts, i kept what worked, at least i was occupied. you fought the fight then every night i held you while you cried.
Track Name: why fit?
i get a late night call. she cries into the speaker. she says, “if i can't make myself a home here,  i guess i don't belong anywhere! am i still a stranger getting on and off trains?  will anyone ever know my name? will i find my place? i feel like something in me will never be good  and i can't shake it.”

the map gets larger  as you get older, and there's a pin here! here! and there! there! where are we going?  should we keep roaming? there must be ways to find comfort in the question mark, in the no answer, in the constant dark, so why do we still want to fit  when the world just just just just just just rejects us?

well, i'll always be there to answer your call.
Track Name: her dog
so we’ve got this bruise, these bruises. i feel like i’m tied up. i’m so useless. fuck it. a body’s just a bag of shit. i know this. i know this. i know this. i argue in my head now. i barely sing. i used to be more interested in hollering. i saw her walk her dog like she never hurt me. i still haven’t said a word to anybody.

i am trying to say what i mean but this humiliating sobriety  is making it hard to come clean—i am left with only debris.

the days grew darker, shorter. our own worlds weren't enough to help us stay above the weight of what the world really was. i saw it in your face  every day when you returned: that no amount of stargazing would undo the hurt. i wanted to save you but i was also stuck.  if i cannot save you can we still be in love?

between a gallop and a trot is a canter!  and a light that is lit is a lantern!  and a speech that cannot reach remains just words  and they reside by your bedside and they will stay there, unheard! except at night when the light's out and you drift into dream  and even there you'll be too scared to tell them what you mean!  see: a river isn't done until a river is done!  how can i go another day without swimming to the sun?  how can i go another day without saying what i want to say?  i bite my tongue and worry: will the worry go away?  i tried to be like him—all cuss and spit—but something in me broke! i still need privacy especially as i grieve so please let me alone!

i almost confessed  but immediate regret  made me quell my voice. i got closer and i shook him as the violence overtook and i said right in his ear: “what is it like to not want to die?”

(“and we all will sleep at the bottom of the river…”)

my body needs a reason to rally itself but instead of inspired i am overwhelmed by the task put forth: which is get and stay well. it can’t be done! it can’t be done! so i imagine a “farewell”: fill my pockets with stones until i am heavy as i move close towards the estuary. the waves start licking at the bottom of my feet; i dip them in, say to the stars, “please, consume me.” i made a portrait of this moment ten years ago, knowing then that this feeling i would not outgrow. now i try to imagine something else in its place, but once it’s there the feeling seems impossible to erase.

is there a way out?
Track Name: it does not get better (reprise)
the days grew brighter, longer. we left the house again. we lost our keys, scraped our knees, and forgot our plans. i had a dream you laughed at me when i asked for help, but you were there when i awoke and your warmth, i felt. still every day nothing changed—i was locked in my head. but you stayed here and dried my tears on your sleeve and said:

...so i’d like to propose a watermelon! earth to ursa major, beckon:  let’s not wait to get into heaven! we’ll grow our own glorified garden! if their history is to ignore us, we'll sew our memoirs into their songbooks! then they will sing—despite their confusion! and as they sing, they will have proven  that even without grasp, even without reason, a song still goes on, and as such, the meaning! don't worry, dear, my little star scratcher: they can try to break us, but we'll never shatter!
Track Name: awl/leather
home is where the heart attack was.  he’s fine now, but it came as a shock.  for a second there, i thought he was gone, and even just that second felt far too long.

home is where you came with good news. we fell asleep, cats at our feet, hit snooze—and before we knew it, it was noon.  i went to work again and daydreamed of the moon.

i was delirious, but i said i was fine.  my friends would invite me out, but i would decline. she brought music back into the house  so i stayed in and sang with all of the lights out.

now we hum our own soundtrack! gather lilacs in pitch black! he says, “though the dark feels like forever, hold my hand and remember what he taught before he died: it’s the cracks that let in the light!”

i have the awl, you have the leather! so let’s start pricking holes together!

Bandcamp Daily  your guide to the world of Bandcamp

Featuring Gary Bartz, 5 years of Rhythm Section Intl and an LP of the week by Nicolas Jaar